Banking Insider To Governments: You Should Want Bitcoin To Be Way More Private 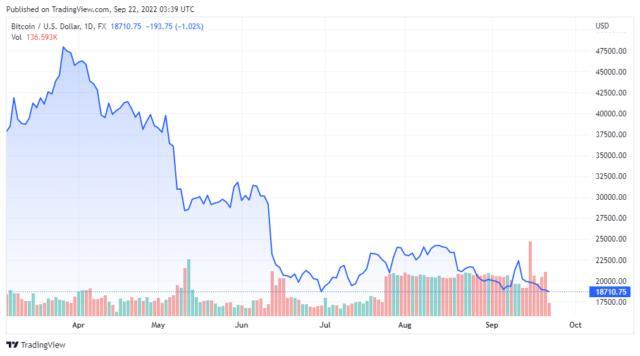 He or she, on a condition of anonymity, wrote an essay for The Bitcoin Policy Institute. It starts with, “Financial privacy – and, more specifically, the requirement to obtain informed consent prior to the collection and use of another’s personal financial information – is fundamental to individual freedom.” From there, it goes to Mordor and back. Is the banking insider on to something? Or is the banking insider just toeing the bitcoiners’ party line? Let’s examine what she or he said and find out.

But first, we shouldn’t separate this paragraph from the opening lines. It accompanies and complements them.

“Due to the dual threats of exponentially increasing cybercrime and increased government surveillance and scrutiny of financial transactions, individual financial privacy is and has been under attack on multiple fronts, and the true costs are starting to manifest in noticeable ways.”

This is a very important subject and the world should thoroughly discuss it ASAP. This banking insider is doing the governments a favor by explaining to them how privacy works in bitcoin. The essay also reads like a preemptive strike against possible Tornado Cash-like sanctions against the bitcoin network.

About The Author/ The Banking Insider

Normally, we wouldn’t disrupt the flow of the article with author info, but this time it’s important. If the readers don’t believe in the banking insider, they won’t take his words of wisdom seriously. This person knows what’s up.

“The author is choosing to stay anonymous to protect their identity and the company they work for. They have worked at multiple publicly traded financial institutions in the fraud prevention and mitigation space; from ground-level tactics to enterprise strategy and policy.”

They also worked in “identity verification” and are involved in KYC and AML “compliance and reporting.” The banking insider currently works at a bank, helping them “to prevent fraud and comply with existing regulatory guidelines around customer identity.” Their warning for governments and citizens alike is as chilling as it is needed.

“As someone who has seen identity theft upend the lives of countless victims, I know how important financial privacy is to protect consumers from scammers and the criminal networks that have proliferated over the last 15 years. It’s estimated that global fraud losses equate to 6.4% of global GDP, coming in at a staggering $5.38 trillion dollars in 2021. Experts cite protecting and securing personal financial information as one of the most important actions a person can take to mitigate these threats.”

And since we’re giving credit where its due, The Bitcoin Policy Institute defines itself as “a nonpartisan, nonprofit organization researching the policy and societal implications of Bitcoin and emerging monetary networks.”

According to the banking insider, “cash provides the highest-level privacy.”  In the second place, we have credit card companies or banks, in other words, “third parties to conduct transactions on our behalf.” Using those, there’s “a relatively high level of privacy” because those companies are “legally bound not to disclose our transaction information from others without our consent.”

You know who’s in the third place, “because Bitcoin is an open, public ledger, a user’s transaction history is available publicly to everyone.” The transparency of the bitcoin network means that “anyone can see all the transactions in the past that are linked to the holdings in that wallet address – and in many cases, how much Bitcoin is in the wallet!”

That leads us to prevention. Just in case lawmakers are thinking about directing a Tornado Cash-like attack on bitcoin:

“Bitcoin users who don’t want to share their entire transaction history or net worth when transacting with a merchant can use collaborative transaction tools to bring their financial privacy up to par with their other payment methods. These tools provide a similar service to what Visa provides its users today; they shield transactional details from both the counterparty to the transaction and from external observers.”

It’s not only that collaborative transactions are not a crime. They’re absolutely necessary for the system to provide privacy.

“These collaborative transaction tools demonstrate a clear benefit to end-users but are viewed suspiciously by policymakers and the financial institutions that are enabling the crypto exchanges and services, as these tools are also conceptually attractive for criminals who want to try to “break the chain” of visibility into the sources of their funds.”

In the end, the banking insider is only saying that bitcoin users deserve “the same level of financial privacy that Americans are legally entitled to for day-to-day transactions – regardless of how those individuals choose to pay or be paid.” And that the system is different enough to deserve a new set of rules. And that this is not a trivial matter.

“As Bitcoin users grow via regulated exchanges, lawmakers must ensure that their financial privacy is protected at the same level as all other regulated payment rails. If this isn’t addressed soon, the global threat that fraud poses today will only accelerate.”

Remember, “experts cite protecting and securing personal financial information as one of the most important actions a person can take to mitigate” privacy threats.