Cosmos Struggles With $17 As Price Heads Into Distribution Phase 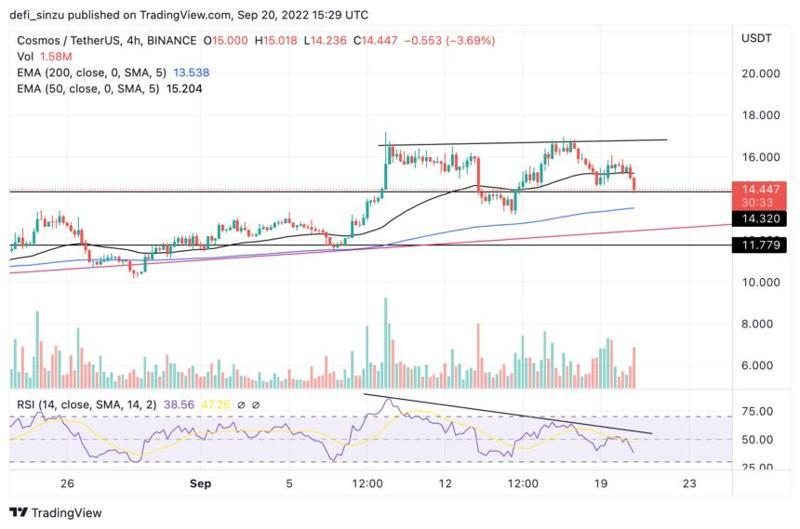 Cosmos (ATOM) has been the major player of the current relief bounce, with price rallying from a region of $6 to $17, with many paying so much attention to its ecosystem as this could prove to be a major player also in the bull run. The price of Cosmos (ATOM) showed so much strength, holding pretty well against tether (USDT) as the market continued to decline in price.

Despite a decline in its price from $45 to $6, over 70% decline from its all-time high, the price of ATOM showed great strength as price bounced from its weekly low of $6, rallying to a high of $17 before facing a rejection to break above that region to higher heights.

The price of ATOM on the weekly chart looks strong despite seeing more sell orders lately as the price continues to hold. For ATOM to resume, its bullish sentiment price needs to rally and break above $17, as this has proven to be a resistance to ATOM prices.

A break below $12 would mean retesting lower demand zones and reluctance for bulls to step into buy orders as there would be more agitation for lower prices.

For ATOM’s price to restore its bullish move price need to break and hold above the $17 resistance preventing the price of ATOM from trending higher. If the price of ATOM keeps rejecting the trendline resistance, we could see the price going lower as there are more sell orders than buy orders.

Weekly resistance for the price of ATOM – $17.

Price Analysis Of ATOM On The Four-Hourly (4H) Chart

The 4H timeframe for ATOM prices continues to weaken as prices break to the downside, as there seems to be a hidden bearish divergence suggesting the price of ATOM could retest the support area at $13.

Four-hourly resistance for the ATOM price – $15.2.

Four-hourly support for the ATOM price – $13.